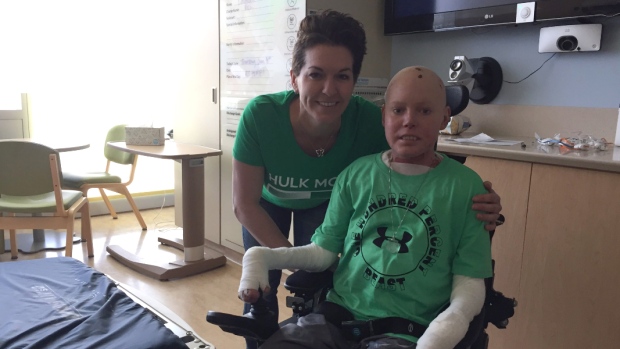 OTTAWA — The late Jonathan Pitre and his mother, Tina Boileau, are being honoured this Canada Day for their work in raising awareness of the rare and devastating skin disease that eventually claimed Pitre’s life.

Over the course of Pitre and Boileau’s life in the public spotlight, they helped to raise awareness of the disease and hundreds of thousands of dollars for the non-profit charity DEBRA Canada, which supports people with EB.

The Meritorious Service Cross is awarded in the civil division to a person for the performance of a deed or activity in an outstandingly professional manner or of an uncommonly high standard that brings considerable benefit or great honour to Canada, according to the Governor General’s office.

The Meritorious Service Medal is awarded in the civil division to a person for the performance, on or after June 11, 1984, of a deed or activity in a highly professional manner or of a very high standard that brings benefit or honour to Canada.

These honours are being given to Canadians this Canada in place of the Governor General’s traditional Order of Canada list.

Payette’s office says the list was not prepared this year because of the COVID-19 pandemic. The spring meeting of the advisory council that recommends nominees had been cancelled.

This year, the Governor General is shining a spotlight on lesser-known decorations for bravery and meritorious service, as well as the Sovereign Medal for volunteers.

Pitre and Boileau are just two of several recipients of these decorations this year in Ottawa and eastern Ontario.

Ian M. F. Arnold, of Ottawa, for leading the committee that established the first National Standard of Canada for Psychological Health and Safety in the Workplace;

Harry Ing, of Deep River, for founding Bubble Technology Industries, a corporation at the forefront of development in the field of nuclear radiation detection; and

Byron Smith, of Carleton Place, for co-founding Ride For Dad, which raises funds for and awareness of prostate cancer research through large-scale, one-day ride events.

Local recipients of the Meritorious Service Medal include:

Yves Berthiaume, of Hawkesbury, for his leadership as the head of Optimist International and for his contributions to youth education;

Subhas and Uttra Bhargava, of Ottawa, for their philanthropic initiatives in support of innovative research into and awareness of neurodegenerative diseases;

Jacques Janson, of Ottawa, for his contributions to honouring the sacrifice of Francophone soldiers from western Canada; and

Recipients of the Sovereign’s Medal for volunteers include:

Lt.-Col Michael Bisson, of Ottawa, for helping to improve the quality of life of veterans in his community over the past 24 years;

John Bryant, of Ottawa, for his volunteer work on the railway collections of the Bytown Railway Society and the Canada Science and Technology Museum over the past three decades;

Sean Donohue, of Kingston, for his commitment to the safety of his community through the Kingston Police Community Volunteers over the past two decades;

Former Ottawa mayor Jacquelin Holzman, for her dedication to her community since the 1960s and for her advocacy of quality end-of-life care;

Master Warrant Officer Melissa Kehoe, of Nepean, for volunteering with the Bytown Gunners Firepower Museum since 1999, and for managing the “Radio Kehoe” mailing list for current and former military members;

Roméo Levasseur, of Pembroke, for supporting youth in his community and for ensuring the well-being of veterans and their families through the Royal Canadian Legion over the past 45 years;

Douglas Munroe, of Ottawa, for volunteering with various branches of the Royal Canadian Legion for more than 40 years; and

Richard Tobin, of Kanata, for helping newcomers to Canada find jobs in their fields since 2009, through his involvement with the Ottawa Community Immigrant Services Organization.

The Sovereign’s Medal for volunteers recognizes the exceptional volunteer achievements of Canadians from across the country in a wide range of fields and pays tribute to the dedication and commitment of volunteers. They embody the caring country we aspire to build.

News
Oceans Protection Plan a mystery to most Canadians: Researchers

News
Regina police respond to 6 overdoses in 24 hours, 5 of them fatal

News
Highway 1 west of Revelstoke closed due to flooding