“It’s always a gamble when you write a book that doesn’t fit into easily structured categories.” Amanda Leduc is talking about her new novel, The Centaur’s Wife, and the perils of writing a story that defies conventional expectations. “I was taking a gamble that it would even get published,” she adds.

So what has been the result?

Well, in the first place, influential media outlets have long predicted that this will be one of Canada’s big books for 2021. Furthermore, Leduc’s publisher, Random House, is giving it an unprecedented sendoff, with simultaneous appearances in all formats — not just standard print and audio but also specialized formats such as braille so that it immediately reaches Canadians with reading disabilities.

It’s a book that looks at the fairy tale tradition, rips it apart and audaciously reassembles it. Yet even though it enters the realm of the mysterious and inexplicable, it is anchored to a persuasive naturalism In chronicling the drama of a small group of people fighting for survival in the wake of planetary disaster.

As for the big issue of determining where reality really ends and fantasy begins — will we really care about such things? Amanda Leduc marches to her own drummer — an earlier novel, The Miracles Of Ordinary Men, features a character who awakens one morning to discover he has grown wings. So why not reach into mythology and introduce, in realistic terms, a key character who is half man and half horse?

“I knew this would be a story that resisted fitting into a convenient box, so I just needed to trust the story and follow it where it needed to go,” Leduc says from her home in Hamilton, Ontario. “This is a world we know and understand but at the same time it’s not our world.”

Indeed, this sense of two worlds folding into each other is present in the novel’s opening sentence: “In the beginning a horse fell in love with a woman.”

One suspects most readers will be hooked immediately by these words, but it will be a while before they’re allowed to become fully aware of their implications. Instead, following the novel’s tantalizing prologue, readers will be plunged into the apocalyptic horror of a planet decimated by a meteor shower.

A fresh chapter begins with another powerful sentence: “Heather is sleeping when they come, the meteors, raining from the sky.”

Heather — freshly delivered of twins, coping with a foundering marriage, living with cerebral palsy — is the book’s pivotal character. She’s still in hospital when destruction comes, but will find shelter with her husband and a small group of survivors, and eventually emerge to find a landscape so ravaged, so stripped of civilization’s necessities that even finding food, housing and protection from the approaching winter becomes a daunting challenge.

There’s also this mysterious mountain, still green and fertile, that casts its shadow over this blighted cityscape. It’s a place of danger and legend. People ascend it at their peril. They may disappear or die. Heather’s own father, we learn, fell to his death from this mountain. And what of those strange creatures in its heights — in particular a centaur named Estajfan, in helpless limbo between a real world and a magical one, yet vital to an understanding of Heather’s own story?

The Centaur’s Wife is, on one level, a survival thriller, but that’s not all that happens within its 308 pages. From time to time, fairy tales will make seamless entries into the narrative. These are by no means random interludes — their purpose will become clear by the end — and they are definite departures from the world of the Brothers Grimm and Hans Christian Andersen. In this book such stories as The Goose Girl and the Jealous Bird are products of Amanda Leduc’s own imagination and contribute to this novel’s larger concern which has to do with the plight of those who are marginalized and “different” in our culture.

“I’ve been interested in fairy tales for a very long time, particularly in how disability is traditionally portrayed in them,” Ludwig says. As someone who lives with cerebral palsy, she was so fascinated by the way the fairy-tale tradition informs society that she wrote a critically acclaimed non-fiction study, Disfigured, a couple of years ago.

“Disabled characters are traditionally portrayed in fairy tales as villains or as suffering from something that has to be overcome,” she says. So, there’s a happy ending for the Beast once he becomes a handsome prince or for the Ugly Duckling in becoming a graceful swan. “I’ve been interested in the way we unconsciously use fairy tales as a way to figure out our place in the world.”

Leduc seeks to examine these issues in her new novel.

“It’s essentially about a group of people who are survivors, who are coming together after a great tragedy and telling themselves stories in order to create bonds of community,” she explains.

In writing the novel, she found herself having to rethink Heather.

“One of my light-bulb moments came when I realized that Heather should have cerebral palsy like myself. She didn’t start out that way, but halfway through the book I realized that she was in fact disabled. That would shine a light on the different things I wanted to do with this book.

“Heather isn’t the only disabled character in the book. There’s a whole cast of characters with a wide range — cerebral palsy, cystic fibrosis, PTSD, depression — along with the collective trauma they’re experiencing.”

As for the presence of centaurs, they seemed a perfect choice for a narrative exploring both disability and difference.

“I liked the idea that they were half one thing and half another, and that they could exist in both a magical and realistic world … yet they feel they don’t belong in our world because of their differences. That speaks very much to me as a disabled person not necessarily fitting into the nondisabled world.”

She hopes her novel sounds a note of hope.

“Hope can be quite a complicated thing. It’s the tiny moments, moving forward day by day, inch by inch, that can be the way to survival. In this new world, where everything has been destroyed, there’s the opportunity for growth. How do you move forward, and create a new world together?”

Sign-up to receive the weekly top stories, contest and promotion announcements every Tuesday

Thanks for signing up!

A welcome email is on its way. If you don’t see it please check your junk folder.

The next issue of Canada.com Newsletter will soon be in your inbox.

We encountered an issue signing you up. Please try again 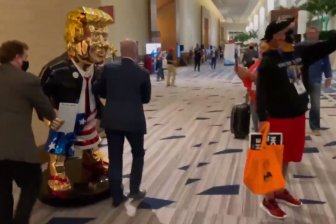